The OpenGrab EPM v3 is an electropermanent magnet, combining the advantages of electro and permanent magnets. The device creates a very strong magnetic contact with a ferrous target. It supports UAVCAN, RCPWM and push button operation. OpenGrab EPM v3 has been developed by NicaDrone in cooperation with Zubax Robotics. 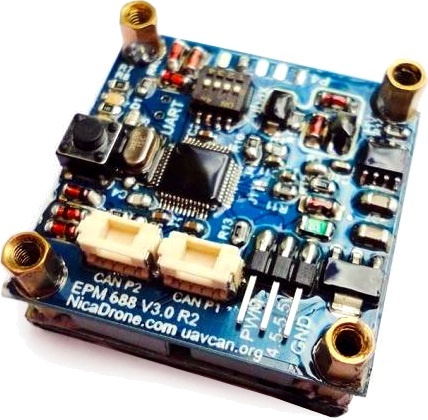 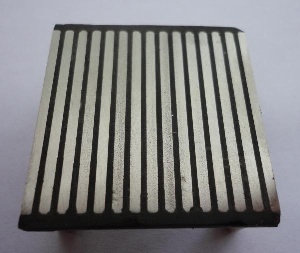 The device poses an electric shock hazard. Do not touch exposed parts of the circuit while the magnet is operating.

The NXP LPC11C24 MCU drives a MOSFET connected to a transformer in a flyback configuration to charge the main PET capacitors up to 475 V. A thyristor bridge is used to discharge the capacitor in either direction through the winding inside the AlNiCo material. This results in a short, 20 μs 300 A pulse creating a 100 kAm field in the AlNiCo material. This causes the magnetic domains in the AlNiCo magnets to align in a particular orientation to form a magnetic circuit with a ferrous target. More detailed explanation of the operating principle is available on Wikipedia.

The bottom surface of the magnet should be kept clean, because dirt or metal shavings can be crushed into the surface when the magnet is turning on, causing an insulation breakdown.

The diagrams below document the mechanical arrangement and dimensions (click to enlarge): 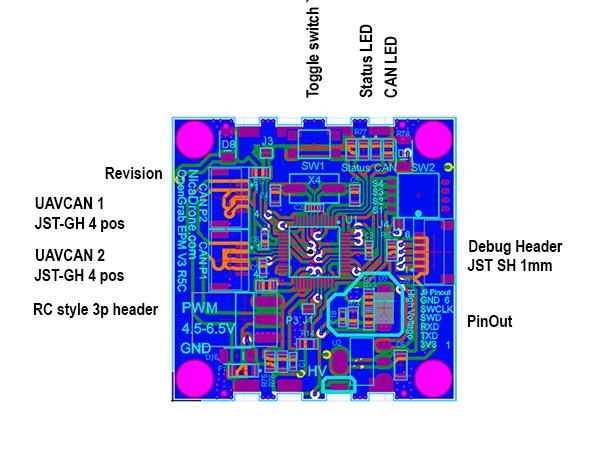 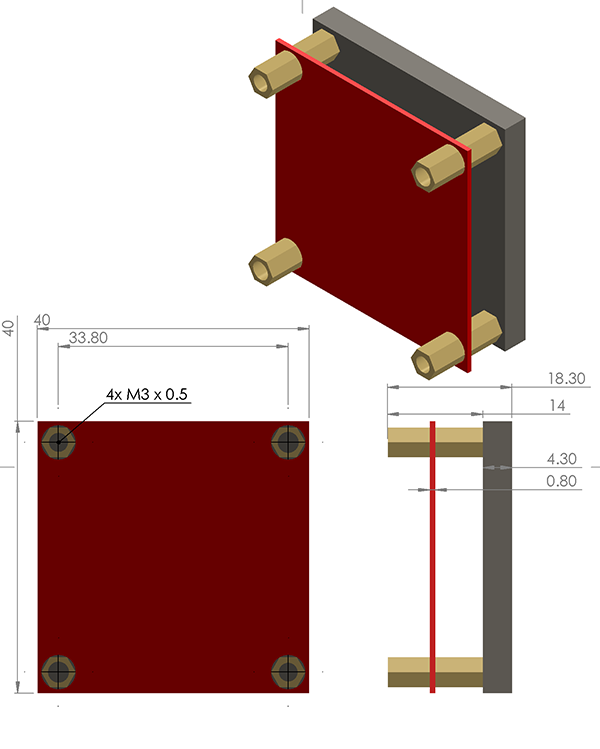 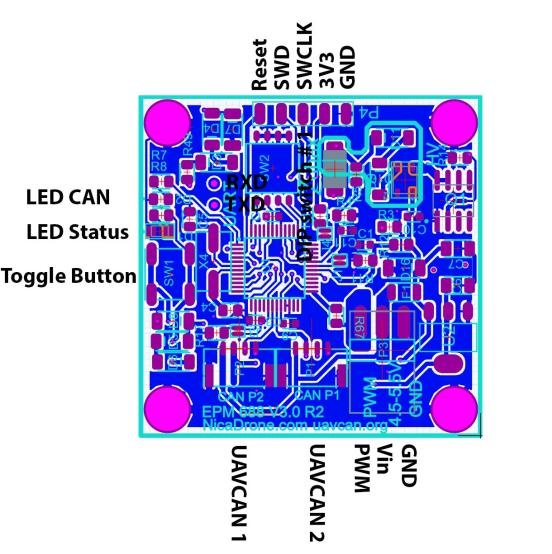 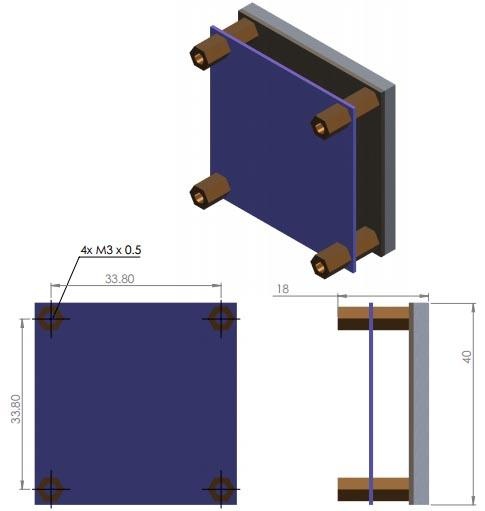 Pressing this button for at least 200 milliseconds will toggle the EPM. 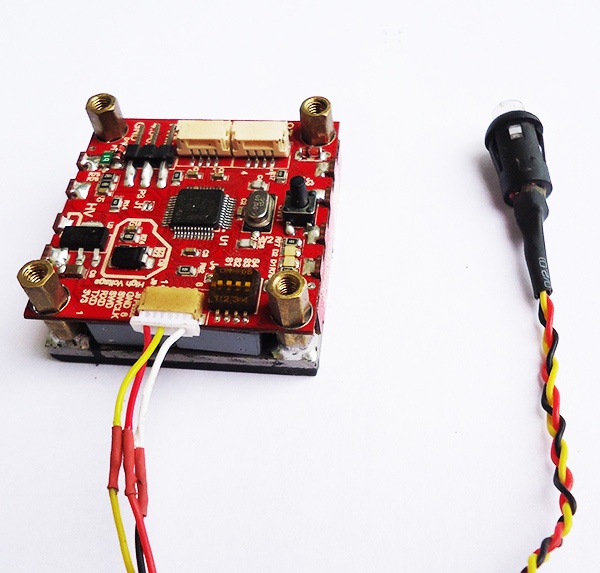 An external button can be connected to the pin 1 (3V3) and 3 (RXD) of the UART header (J9). Pulling pin 3 (RXD) high momentarily toggles the EPM. External button is supported in firmware builds starting from March 2017.

This LED indicator shows the status of the device derived from the continuous self-diagnostics, according to the UAVCAN node status code:

Note that CAN frames filtered out by the hardware acceptance filters will not cause the LED indicator to blink.

Connect an RC receiver or some other hardware capable of producing RCPWM signal (e.g. Pixhawk) to the RCPWM connector.

The device divides the PWM pulse duration into three ranges: 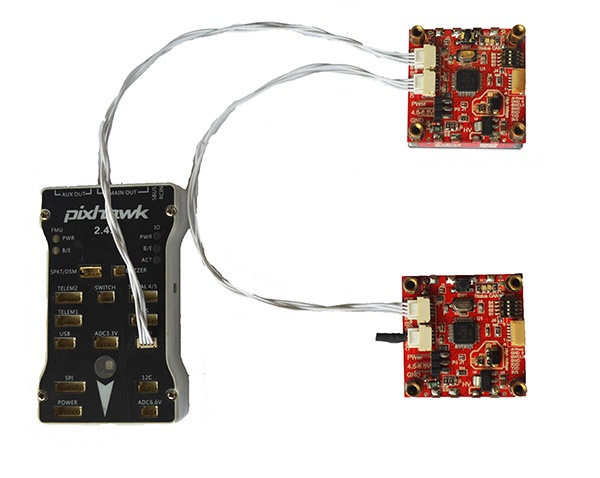 Use the UAVCAN GUI Tool to interact with the magnet from a computer (Windows/Linux/Mac).

The following table describes the meaning of the standard UAVCAN health codes.

Possible reasons for the health code being ERROR: 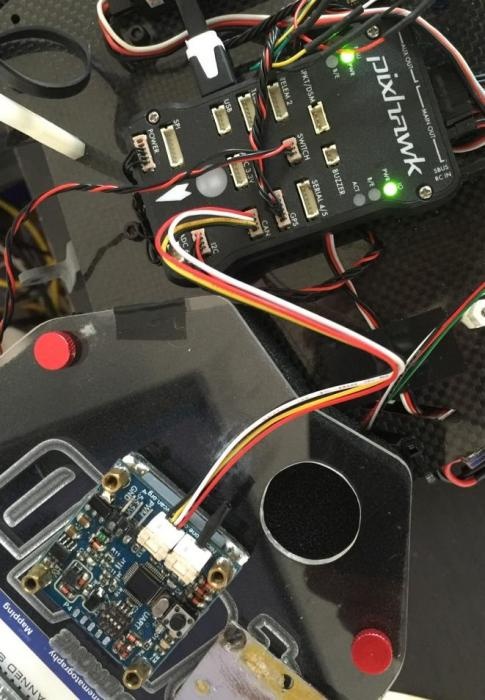 This device does not invoke any services.

The following service servers are implemented:

This message allows to control the magnet via UAVCAN. The fields are interpreted as follows:

If the field does not equal the hardpoint ID of the current device, the message will be ignored.

This message carries the status of the magnet.

Hardpoint ID of the current magnet.

Indicates whether the magnet is turned on or off:

The device will detect the CAN bus bit rate automatically after powering on. The automatic detection is done by means of listening to the bus in the silent mode, alternating between the pre-defined values of supported CAN bit rates (listed in the table) until the first valid CAN frame is received. Unconfigured CAN bus does not interfere with other functions of the device. 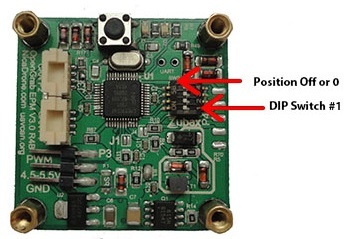 The device is equipped with a 4-position DIP switch that allows the user to configure the Hardpoint ID and enable or disable UAVCAN dynamic node ID allocation:

Hardpoint ID is defined in binary by the lowest 3 switches. The table below clarifies the binary encoding:

If the DIP switch #4 is set to ON, the device’s node ID will be fixed at (Hardpoint ID + 100). For example, if the Hardpoint ID is set to 5, the fixed node ID will be configured as 105. In this case the device does not require an external dynamic node ID allocation server, and therefore it will be accessible via UAVCAN immediately once the CAN bus bit rate detection is done.

The EPM reports error and status messages over this interface. This interface can also be used to update the firmware – please refer to the source repository for instructions (link below).

Parameters of the serial interface are as follows: